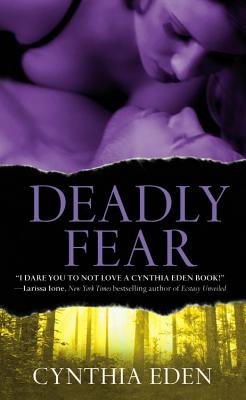 By Cynthia Eden
Email or call for price.
Special Order

FBI Special Agent Monica Davenport has made a career out of profiling serial killers. But getting inside the twisted minds of the cruel and the sadistic has taken its toll: She's walled herself off from the world. Yet Monica can't ignore fellow agent Luke Dante, the only man who ever broke through her defenses.

Luke has the unique ability to put victims at ease . . . professionally, he and Monica made a perfect team. Now they're reunited to catch a murderer who uses his victims' deepest, darkest fears for sport - but their investigative skills aren't enough. Luke and Monica will have to face the secrets from their past, the ones that terrify them the most, if they are to have a future together.

But can they catch a killer whose weapon is . . .

"Eden has written such an intricate web of suspense, the reader will be lead on a highly charged pace until the climactic ending. Highly Recommend!"—The RomanceReadersConnection.com

"It's a good read for passing the day away, but avoid the nights, you might be afraid to sleep."—RomanceReviewsToday.com on Deadly Fear

"With lots of twists and turns and close calls, Deadly Fear is romantic suspense at its best!"—TheRomanceStudio.com

"With a perfect blend of romance and suspense, this book will have you dying to turn the page."—Kelly Morgan, AuthorKellyMoran.blogspot.com on Deadly Fear