Darwin's Sacred Cause: How a Hatred of Slavery Shaped Darwin's Views on Human Evolution (Hardcover) 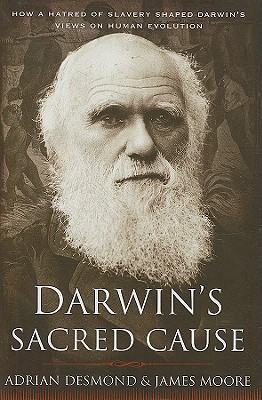 An astonishing new portrait of a scientific icon"

In this remarkable book, Adrian Desmond and James Moore restore the missing moral core of Darwin's evolutionary universe, providing a completely new account of how he came to his shattering theories about human origins.

There has always been a mystery surrounding Darwin: How did this quiet, respectable gentleman, a pillar of his parish, come to embrace one of the most radical ideas in the history of human thought? It's difficult to overstate just what Darwin was risking in publishing his theory of evolution. So it must have been something very powerful--a moral fire, as Desmond and Moore put it--that propelled him. And that moral fire, they argue, was a passionate hatred of slavery.

To make their case, they draw on a wealth of fresh manuscripts, unpublished family correspondence, notebooks, diaries, and even ships' logs. They show how Darwin's abolitionism had deep roots in his mother's family and was reinforced by his voyage on the "Beagle" as well as by events in America--from the rise of scientific racism at Harvard through the dark days of the Civil War.

Leading apologists for slavery in Darwin's time argued that blacks and whites had originated as separate species, with whites created superior. Darwin abhorred such "arrogance." He believed that, far from being separate species, the races belonged to the same human family. Slavery was therefore a "sin," and abolishing it became Darwin's "sacred cause." His theory of evolution gave "all" the races--blacks and whites, animals and plants--an ancient common ancestor and freed them from creationist shackles. Evolution meant emancipation.

In this rich and illuminating work, Desmond and Moore recover Darwin's lost humanitarianism. They argue that only by acknowledging Darwin's Christian abolitionist heritage can we fully understand the development of his groundbreaking ideas. Compulsively readable and utterly persuasive, "Darwin's Sacred Cause" will revolutionize our view of the great naturalist.

Praise for Darwin’s Sacred Cause

"Arresting . . . confront[s] the touchy subject of Darwin and race head on . . . Adrian Desmond and James Moore published a highly regarded biography of Darwin in 1991 . . . the case they make is rich and intricate, involving Darwin's encounter with race-based phrenology at Edinburgh and a religiously based opposition to slavery at Cambridge. Even Darwin's courtship of Emma, whom he winningly called 'the most interesting specimen in the whole series of vertebrate animals,' is cleverly interwoven with his developing thoughts on 'sexual selection' . . ." - New York Times Book Review

"'Darwin’s Sacred Cause' shows that there is still new material to be gleaned from the life of a man much picked over, and who turned the world upside down." - Economist

"This book dispels the legend, long attached to retrospective accounts of Darwin’s research, that the great scientist’s interest in evolution was spurred by Galapagos finches. It was people all along . . . [Desmond and Moore] shed welcome light on lesser-known features of Darwin’s work, while also providing an exceptionally crisp account of mid-nineteenth-century debates over the origins of racial differences." - Edward J. Larson, Bookforum

"In this controversial reinterpretation of Charles Darwin’s life and work, the authors of a highly regarded 1991 biography argue that the driving force behind Darwin’s theory of evolution was his fierce abolitionism, which had deep family roots and was reinforced by his voyage on the Beagle and by events in America." - Scientific American

"'Darwin’s Sacred Cause' is a compelling narrative, well researched and convincingly presented, offering a new understanding of who Darwin was and the passions that motivated his thought. Particularly eye opening is the surprising connection between Darwin’s theory and the Christian abolition movement as they together fought a scientific community that rejected the Christian belief that all mankind was descended from a single pair. The story of that unlikely alliance is fascinating to follow, full of colorful characters both noble and vile, revealing how science and religion were debased by the evil of racism." - BookPage

"Who better than Desmond and Moore, Darwin's acclaimed biographers, to bring a fresh perspective to Darwin's central beliefs? . . . This masterful book produces a perspective on Darwin as not only scientist but moralist . . . Desmond and Moore build a new context in which to view Darwin that is utterly convincing and certain to influence scholars for generations to come. In time for Darwin's bicentennial, this is the rare book that mines old ground and finds new treasure." — Publishers Weekly, starred, boxed review

"Rush[es] forward with the urgency of the abolitionist spirit. Magnificent. — Booklist, starred review

"Well researched, likely to be controversial . . . this book provides [an] enlightening glimpse into a life of seemingly infinite complexity." — Library Journal

"Desmond and Moore’s fascinating new look at Darwin forces us to revise and expand the way we look at this revolutionary figure, and to see him wrestling with moral as well as scientific questions. And it is a reminder of just how much the issue of slavery loomed over everything in the nineteenth century, including even fields that were apparently far distant." —Adam Hochschild, author of King Leopold’s Ghost and Bury the Chains

"This exciting book is sure to create a stir. Already widely admired for their pathbreaking biography of Charles Darwin, Desmond and Moore here give an entirely new interpretation of Darwin’s views on humankind, bringing together scholarship and sparkling narrative pace to explore theories of ape ancestry and racial origins in the Victorian period. Darwin’s part in making the modern world will never be the same again!" —Janet Browne, Aramont Professor of the History of Science, Harvard University, and author of Charles Darwin: Voyaging