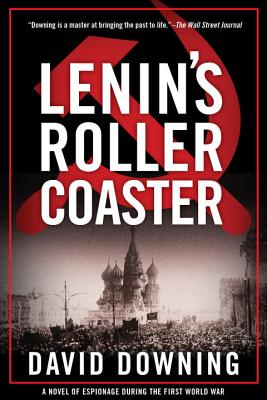 By David Downing
Email or call for price.
Hard to Find

This is book number 3 in the A Jack McColl Novel series.

In Russia the Bolshevik revolution is in full-swing while the supposed Great War is destroying Europe in ways never before imagined. Fulltime lovers and part-time enemies, British spy Jack McColl and progressive American journalist Caitlin Hanley, have seen their relationship survive this far but in a world defined by “win at all cost” attitudes how much longer can they hold out?

Winter 1917: As a generation of Europe’s young men perish on the Eastern and Western fronts, British spy Jack McColl is assigned a sabotage mission deep in Central Asia, where German influence is strong. The mission only becomes more dangerous the closer he gets to its heart. Meanwhile, the woman he loves, Irish-American radical journalist Caitlin Hanley, is in Bolshevik Russia, thrilled to have the chance to cover the Revolution. Caitlin knows Moscow is where she is meant to be during this historic event—even if she is putting her own life at risk to bear witness.

But four years of bloody war have taken their toll on all of Europe, and Jack and Caitlin’s relationship may become another casualty. Caitlin’s political convictions have always been for progress, feminism, and socialism—often diametrically opposed to the conservative goals of the British Empire Jack serves. Up until now, Jack and Caitlin have managed to set aside their allegiances and stay faithful to each other, but the stakes of their affair have risen too high. Can a revolutionary love a spy? And if she does, will it cost one of them their life?

David Downing grew up in suburban London. He is the author of two other Jack McColl novels, Jack of Spies and One Man’s Flag; the thriller The Red Eagles; and six books in the John Russell espionage series, set in WWII Berlin: Zoo Station, Silesian Station, Stettin Station, Potsdam Station, Lehrter Station, and Masaryk Station. He lives with his wife, an American acupuncturist, in Guildford, England.

"[A] splendid saga of espionage during the Great War . . . Downing is a master of action . . . [He] also slips in plenty of historical reality—women’s suffrage, revolutionary hopes, progressive politics, Irish nationalism—without ever losing sight of the story."
—The Globe and Mail

"A dizzying ride through the Russian Revolution and its loops and curves into WWI politics . . . packed with historical information and detailed place descriptions."
—Historical Novel Society

“Downing is a master at grabbing the historical moment and holding it close, and he brings the tempestuous revolutionary era to vivid life here, setting it against what appears to be a doomed love story.”
—Bill Ott, Booklist

"A sensitive yet action-packed novel of conflict both on international and interpersonal levels."
—Bruce Tierney, BookPage

"History buffs and espionage fiction fans will enjoy this entertaining novel, which might also make a good choice for book groups commemorating the centennial of the Bolshevik Revolution."
—Library Journal

Praise for the Jack McColl novels

“Downing is a master at bringing little-known history to light and building great plots around it. It helps that he knows how to pace a story and develop characters that stay in the mind. Can’t wait for the next episode.”
—The Globe and Mail

“[Downing] is a master at bringing the past to life through the careful and often
loving observation of even minor players and through the artful deployment of specific detail. In addition, Jack McColl’s debut has a zest, an exoticism and a joie de vivre well-suited to an era when best sellers were being written by Zane Grey, suffragettes were demanding the vote, and opium parlors were a readily accessible temptation.”
—The Wall Street Journal

“Downing reaffirms his place as one of the finest espionage writers with this engaging historical thriller.”
—Bruce Tierney, BookPage, Top Pick in Mystery

“A brilliant historical portrait and a captivating love story to boot. A remarkably engaging world tour of pre–World War One espionage featuring an honorable protagonist begging for a long series.”
—Lyndsay Faye, author of The Fatal Flame

“Moves along briskly and offers interesting facts about events now a century past.
It’s always entertaining.”
—The Washington Post